You are destined lovers across the whole of space and time.

In each millennia and every passing moment, you find each other again.

Sometimes you are just friends, and other times you fall deeply in love.

Each time you find each other, you are always a little different. It takes time to relearn what you both enjoy and how to take care of each other, but you are determined to make it work.

Whether or not you stay is another story, but sometimes all we have is the here and now, and we do our best to enjoy it with the people we have.

It is in this queer space, the in-between space, that we begin.

✨Create fun dates in liminal spaces (e.g. a gas station at 1am)

✨Roleplay girls who are destined lovers across spacetime

✨Roll the die every turn to see if time shifts

Featuring, a diverse, quirky cast of characters to play as (this isn’t all of them I couldn’t fit them all): 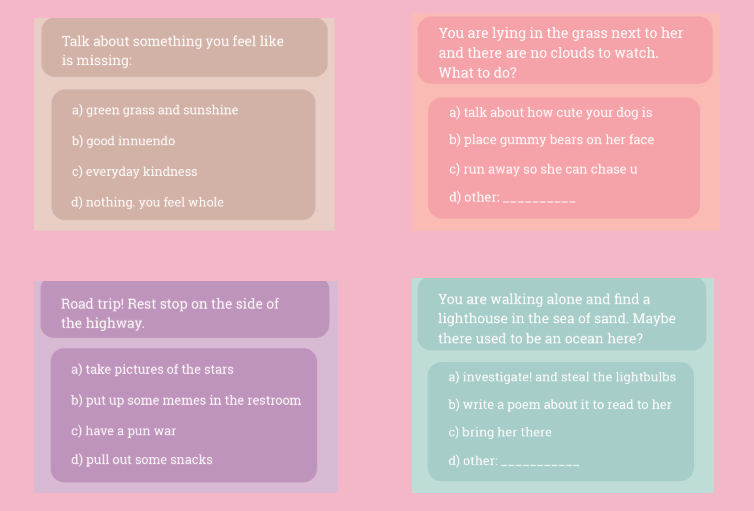 And, of course, settings inspired by the magical, in-between spaces of life~

Signup for email updates/Learn more about the game at this website: jowlin.wixsite.com/queeringspacetime

Thank you to everyone who’s supported and played my project. 💖

In order to download this card game you must purchase it at or above the minimum price of $5 USD. You will get access to the following files:

Support this card game at or above a special price point to receive something exclusive.

hi hi!! I'm very interested in this game, but I was hoping to play it on Tabletop simulator on steam (as I'm still quarantining)? But I can't tell how to convert the cards to a custom deck- would you happen to know how to do that?

Queering SpaceTime is a contemplative and emotional game about roleplaying dates between queer characters over space and time. I really enjoyed the well-crafted characters presented and the game’s premise of exploring queer identities over time and pushing our understanding of what is a “queer” experience.

Step 2 of the game setup reinforces the queer themes presented throughout by saying: “Embrace failure. Embrace whimsicality. Embrace doing what you want. Embrace each other.” I LOVE that.

The PDF has an attractive title logo, vibrant colors, and a welcoming and safe vibe throughout the game text. Before beginning play, the setup includes a safety check for players to check-in and make sure everyone is comfortable and ready to play.

The core game loop is roleplaying a series of dates (or one date with a lot of scenes) between characters by drawing prompt cards and talking about their character’s response to the prompts. The prompt cards have a scene and 4 options to guide the character reactions to the scene. If you have played For the Queen or Star Crossed, you’ll feel comfortable with this game’s storytelling mechanics.

In each round, players draft character cards and keep them secret from each other. The character cards are absolutely beautiful and describe lovable, complex, and 100% queer characters representing a wide variety of queer identities and ethnicities. The character cards include 4 stats with predetermined relative values on a sliding scale: Extroversion, Height, Openness, and Buffness. I like Extroversion, Openness, and Buffness, but I don’t love having Height as a stat to base role-play off of. Each character card also has 2 Love Languages which are one of five possibilities (Touch, Time, Words, Gifts, and Actions).

After completing the second prompt card, the players will roll a d12 to determine if there is a time shift. Players will keep drawing prompt cards and roleplaying until a 1 is rolled. If a 1 is rolled, the scene fades away, time shifts, and the round is over. Players reveal their character cards to each other and have the opportunity to talk about their series of dates. Players then draw new character cards and reset the relationship in a new time and space.

This game encourages players to embrace liminality: “an in-between, transitional space that can feel lonely, nostalgic, or comforting and cathartic.” Given the amazing character descriptions on the character cards and cool prompts, there is a wide variety of role-play at your fingertips, from fun and campy, to somber and gut-wrenching. I love that the game embraces liminality since queer experiences aren’t just the joy and pain commonly portrayed in mass media. Queer experiences are everything, anything, and combinations of multiple things. Exploring the in-between space is very cool.

I also appreciate the glossary of queer terms and references. Safety and comfort are very important when roleplaying and it’s important to understand and respect the wide spectrum of queer identities, including undefined ones.

Overall, this game is very well thought out and fosters a queer and intimate experience between players. I look forward to playing this with another queer person whom I want to know a little better and use this game as a bonding experience.

Thank you so much for the thoughtful review, Max!! *clutches the kind words to my chest* I'm really glad you appreciated the themes and I hope you enjoy playing it! <3

this looks really great, can't wait to look through more of your work : )

Delightfully open to interpretation, this game is about players collaborating and communicating to ensure the women they roleplay as have an enjoyable date.  Features women of colour (with specific ethnicities given), trans women, and women of various sexualities - including aspec representation. Full release ETA summer [2020?], according to website - no rating will be given till then.

However, there seems to be some inconsistency in the use of romantic orientation labels and sexual orientation labels on the cards, with some characters only having one of these listed, and others only having a gender presentation given. Furthermore, while some characters are labelled as trans, others are not labeled as cis, which creates a sense of transness in opposition to the default, unlabeled norm. It would be helpful for the dev to establish whether these gaps are intentional (e.g. to allow players to customise other aspects of the character's identity - in which case, say so in the rulebook) or an oversight, in which case it would be great to see this amended before the release. Also curious to see whether any non-binary identities aligned with womanhood (e.g. demigirl) or intersex people will be included in the final version.

Thank you so much for your feedback! <3 Yes, I have been aware of the inconsistency, but thank you for your concise clarification of it to me. The gaps were an oversight and I will take steps to amend them.

Glad I could help! :) I look forward to seeing the finished version!

I love this concept! The focus on liminality and constantly shifting characters seems really fun. I can't wait to play it! :) 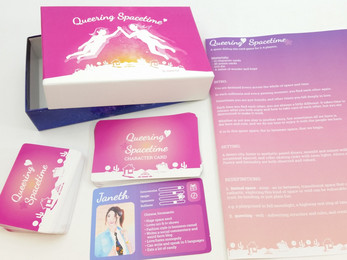 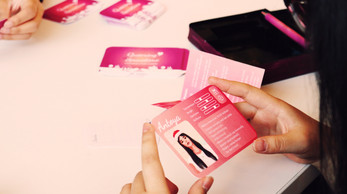 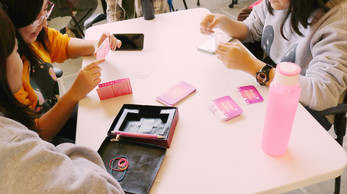 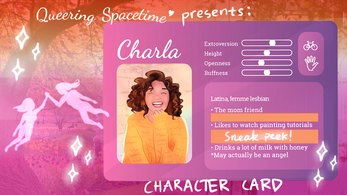 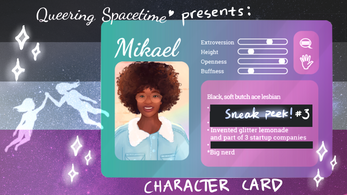 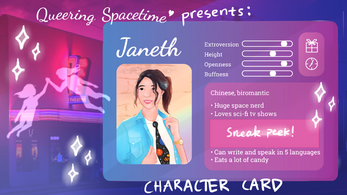